Crossrail are using a fleet of state-of-the-art bespoke machines to fit out their tunnels. Templant are powering the concrete rigs, helping Crossrail to create its tunnels.

The machines being used to assist in the fitting out of the Crossrail tunnels genuinely have to be seen to be believed, these state-of-the-art machines look like they could’ve come straight out of Star Trek! Templant are powering the concrete rigs that are being used in the construction of the tunnels, which is quite a sight. 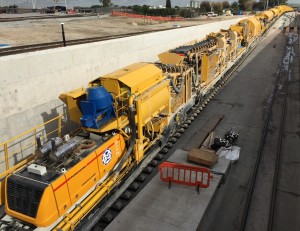 About The Concrete Rigs

The concreting train was brought to the UK via the Channel Tunnel in August of 2015 after refurbishment. The train itself is a staggering 465 metres long, which is more than the equivalent of four full football pitches. The train is so large that it will be spilt into two when it is not in use for the sake of space saving.

At peak production, the machine will be able to install up to an impressive 250 metres of concrete a day. This concrete pouring will take place during the night, with maintenance and restocking occurring during the day.

Maintaining this machine is a 24-hour operation and is of the upmost importance, as the machine being in full working order is vital to the completion of the Crossrail project. If the power supply fails, there is risk of concrete setting before being placed, and this could cause huge delays.

Few Londoners are unaware of what is happening underneath the city. The Crossrail Project is Europe’s largest construction project and is due to be completed in 2017. 42 kilometres of tunnels have been completed by giant tunnel boring machines since the inception of the project in 2012. The machines used to build the tunnels, and those being used to complete the project, are truly impressive.

With Templant powering the concrete rigs, and up to 250 metres of concrete being installed every day, the Crossrail Project looks set to be on time, and to be more impressive than anybody may have expected.

The concrete pumping company chose Templant for two reasons: First, they wanted to be sure that they would receive an uninterrupted power supply, and second, they insisted on generators fitted with the Diesel Particular Filters (DPF), which provides cleaner diesel power – this is vital when the generators are running day and night in a confined, underground space.

Hire a Generator with Templant today!

For more information on our Transport and Generator Hire Services, please contact us today and we will be in touch.

CALL US NOW
EMAIL US NOW